skip to main | skip to sidebar

It's 106 miles to Chicago, we got a full tank of gas, half a pack of cigarettes, it's dark, and we're wearing sunglasses.

Liquor cabinet is stacked, the kitchen has replaced the bedroom as the locale I'm most skilled in, I have the Directv ultimate choice package, I worked 50 hours this week at a job I hate, I have forsaken strange women with little chance anyway even if I hadn't, I cleaned the garage and the grill this morning and I'm five days away from having 20 years of scar tissue cut out of my intestines by a guy I met once, so no honey, mere words can't describe how little interest I have in going out tonight. 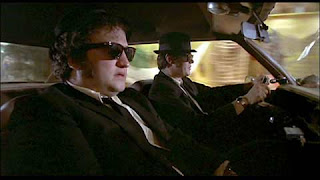 After a three show rut in November, I had a couple of really fun nights at Monkey Pants and Tosos. The Tosos show might have been my favorite show ever. Just a really great crowd. So, here is where I'm at in January: 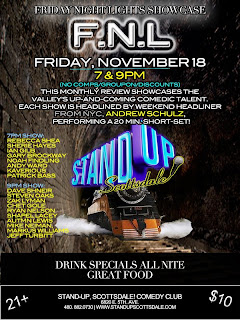 I started doing comedy on St. Patrick's Day this year and I'm going to end the year having done 42 shows. A lot of comics have done a lot more than that, but I thought it was a pretty substantial investment for a guy living in the far west valley with a full time job, a part time job and three kids. My last four shows of the year are at Hidden House, Stand Up Scottsdale, Film Bar and Monkey Pants. I will be hosting at Hidden House and Monkey Pants, which will be my first times doing so. I'm very excited for all these shows.
Hidden House Comedy Wednesday November 16 at 9:00 PM
Stand Up Scottsdale Friday November 18 at 9:00 PM
Film Bar Phoenix Tuesday December 6 at 9:00 PM
Monkey Pants Tempe Thursday December 8 at 8:30 PM
Toso's Friday December 9 at 9:00 PM
Posted by Jeff at 1:44 PM No comments: 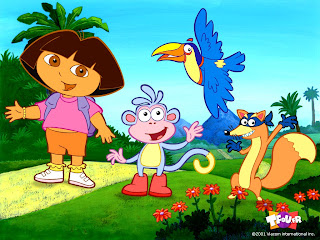 Took my daughter to see Dora the Explorer live on stage last week. Not sure it was my best parenting decision. She’ll need to try heroin to reach that level of bliss again as a human. We’ll be in a grocery store and she can spot a Dora lunch bag on the top shelf 100 feet away. If Osama Bin Laden wore a magic backpack and hung out with a talking monkey, it wouldn’t have taken Seal Team Six and a couple thousand CIA operatives to track him down. And when I say talking monkey, I include everyone at Fox News.
Posted by Jeff at 8:46 AM No comments:

I have a column in today's West Valley View. I might return to doing a newspaper column after a significant break.


One of my favorite novels is the 1998 opus “The Beach,” which tells the story of a community of rugged individualists that cling to their unique ideals. Like all good literature, moral questions get raised and explored. In this case, a member of this separatist beach community gets injured in a shark attack and the group decides to stay isolated instead of bringing him back for the medical attention he desperately needs. His moaning and misery begins to spoil the mood, so he is whisked away from the group to fend for himself. His problem remains unsolved, but most just take comfort in having the issue out of sight and out of mind. A much smaller subgroup in the community tries to nurse him back to health with the limited resources available, while the rest wash their hands of it. 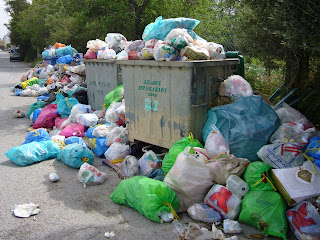 This scene reminds me a lot of the situation facing our public schools. I’m in my fourth year teaching middle school in the Liberty School District and what I’ve generally seen is this state shirk its responsibility to educate the youth. Our school budget, already among the nation’s most meager, goes down each year, while not coincidentally our prison budget is the lone area going up. Last year we had a local override extension election, few voted and it was narrowly defeated. Good teachers lost jobs, skimpily paid teacher-assistants lost jobs and many of the various student supports from reading coaches to English Language Development teachers to the librarians to the discipline coordinators were dismissed. Meanwhile we continue to make do with absurdly outdated computers, limited PE facilities and a dismantled full day kindergarten and sports program. Our exhausted, demoralized staff scrambles to plug all these leaks and truly hope the cavalry comes out to vote on November 8 supporting the override this time.
When people choose to either vote no or not vote at all in these override elections, the problems don’t go away. The students keep showing up, keep needing to be educated, keep looking for adult educators spread further and further thin in bigger and bigger classes with greater subordinate demands to give them the time and attention they often aren’t getting elsewhere in our society full of broken homes, increased poverty and income disparity -- problems children did nothing to cause. Not supporting the schools isn’t like skipping vacation this year to save money. The need and the obligation for education remains. What you are doing when you fail to support education is putting the problem on the teachers, then walking away and telling them it’s your problem. We don’t do that to doctors, nurses, plumbers or any other professionals. We teachers continue to plod along with less and less help despite the fact that it’s wrong, selfish and counterproductive to invest so little in our children compared to every other state in our country. Education is a partnership between parents, teachers, students and the community-at-large. It is not something teachers can, or should, do alone.

Our country right now is in a malaise. We have run up a staggering debt. The social safety net has huge holes in it. We’ve seen the values of our homes decrease, and I would suggest that one of the ways to help is to send a message that Buckeye is a place that supports and invests in education and where you want your kids to go to school. This election is a referendum on how people feel about the value of education and how they want to support those people who spend their days dedicated to the success of your children.

It is also important not to be bamboozled by the misinformation out there. The conversation on this topic in this forum and others tends to be ignorant and mean spirited. People often say factually inaccurate statements like, “there are too many administrators.” Every school in the Liberty District has only one administrator except the largest school. Another fallacy is the role of a teachers union. We don’t have one. I can be fired at any time for any reason, and in fact, my teaching experience by law can’t even be used as a retention criterion. It is actually in a district’s financial interest to fire veteran teachers the way the system is set up now. My check is down $100 from two years ago, my wife and kids don’t have health insurance, my 301 money is down $1500 since I started, and I don’t even have access to extra work like coaching and summer school to try to scrimp by anymore. The current conditions have at least three good Liberty teachers I know ready to leave the state at year’s end, and I would imagine that will be a growing trend.

The local school budget isn’t Washington D.C.’s cesspool of waste and ill gotten lobbyist pork. It’s a shoestring operation that generally solves its problems by just making more and more demands on teachers already stretched to the limit. We need your help and we need your support on November 8.

Incidentally, it should be noted that in “The Beach,“ the shark attack victim died despite the efforts of that small group. He needed more help.
Posted by Jeff at 3:18 AM No comments:

A recent letter writer made the claim that he had to remove his daughter from Freedom Elementary School to give her “a chance.” I’ve taught at Freedom for the bulk of the school’s existence, live a half mile away, my son graduated from Freedom in May and my younger son is in third grade there right now. I think I know the turf and am heavily invested. The school has never been better, and this is primarily related to an entire staff that is awesome. I teach middle school, so this is the area I know best and will speak of most.


Our reading and science scores are up dramatically, and this is in an environment in which our middle school staffing is down 20 percent in the last two years, not to mention the loss of other support areas such as librarian, ELD teacher, physical education teacher and the discipline coordinator. Our population is enormously transient given the housing market crash that continues unabated. I received a new student literally two days before the AIMS test in March and another 3 days before school was over in May to give you an idea of the constant revolving door the school faces through no fault of its own. One subject in one grade level not meeting an unrealistic benchmark can put an entire school on “warning status,” and give an unrealistic impression of what is happening in the big picture. While I hate to say a body as inept as the Arizona Department of Education is right on anything, when they say the AYP standard is unrealistic and misleading, they are quite correct.


The writer makes a factual error in saying the Freedom principal has eliminated writing instruction, and sarcastically mocks the idea that the social studies teacher can teach writing effectively. Writing has been spread among the staff in middle school and continues unchanged in the primary grades. It hasn’t been eliminated at all. And as the social studies teacher, I have 11 years experience teaching writing and have excellent student writing results at Freedom. We have two other highly qualified, effective and experienced writing teachers on the middle school team as well.
No one needs to pull their child out of Freedom or any Liberty School. What they need to do is vote in November for their own property values and their own children by supporting the $9 per month school budget override. They might also consider contacting their child’s teacher and saying, “How can I help you help my child.” And if really motivated, perhaps join the local PTO and pitch in. Those steps would be far more effective than making factual misstatements and insulting people who work long hours with low pay, little job security and lots of abuse for doing an amazing job. Stop by and see for yourself if you don’t believe me.
Posted by Jeff at 7:39 AM No comments:

Labels: Education, letter to the editor

Quick thought on the occupy backlash

Already the "hipster" personality type is being used to attack the various occupy movements. Like elections, this will be about personality, not issues. Yes, people protesting are more apt to read books, make scary references to banking law like the Glass Steagall Act and some might even inhale. If that's too much of a turn off, it makes perfect sense to bash those folks and side with the people who want to cancel your medical coverage when you get sick, destroy the last vestige of your union, foreclose on your house and pay you just enough to need two or three jobs.
Posted by Jeff at 1:58 PM No comments:

October 25 Stand Up Scottsdale
November 1 Film Bar Phoenix
Posted by Jeff at 4:49 AM No comments:

Best of this blog